As LAN is slowly replacing the coaxial cables in radar installations worldwide it is natural for the ScanFaker family to follow along. Networked radar distribution offers several advances compared to traditional cabling but also a few challenges. One of the challenges is that the radar manufacturers have made their control protocols a bit more complex. The SoftFaker hides the complexity from the end user and offers the same simple to use API as for the ScanFaker Board. In fact, it’s identical but with a few more API calls.

If you are already using the ScanFaker boards in your application then the upgrade is painless, but the process may require a recompile of the host application.

The structure is shown below: 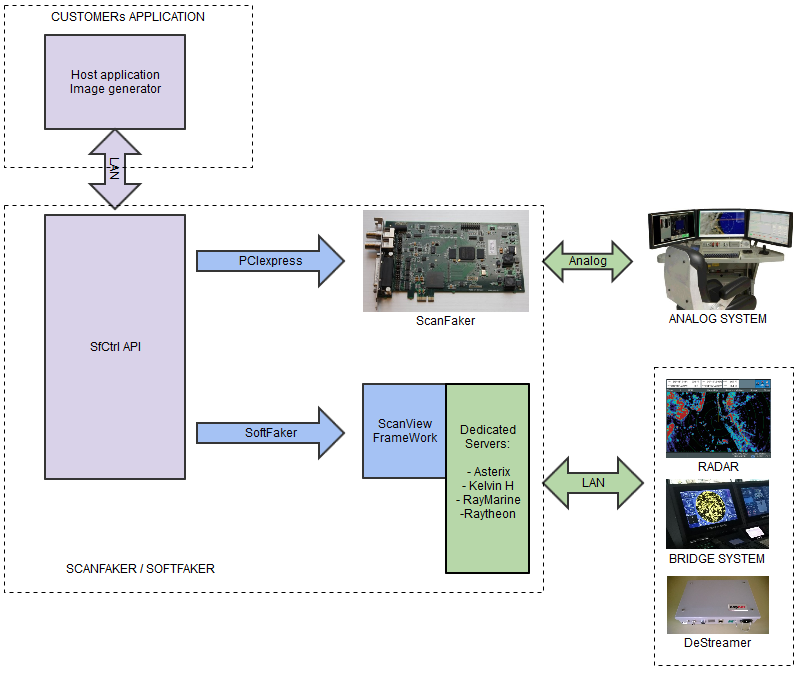 More interfaces are currently in design.

This website uses cookies to improve your experience while you navigate through the website. Out of these cookies, the cookies that are categorized as necessary are stored on your browser as they are essential for the working of basic functionalities of the website. We also use third-party cookies that help us analyze and understand how you use this website. These cookies will be stored in your browser only with your consent. You also have the option to opt-out of these cookies. But opting out of some of these cookies may have an effect on your browsing experience.
Necessary Always Enabled
Necessary cookies are absolutely essential for the website to function properly. This category only includes cookies that ensures basic functionalities and security features of the website. These cookies do not store any personal information.
Non-necessary
Any cookies that may not be particularly necessary for the website to function and is used specifically to collect user personal data via analytics, ads, other embedded contents are termed as non-necessary cookies. It is mandatory to procure user consent prior to running these cookies on your website.
SAVE & ACCEPT